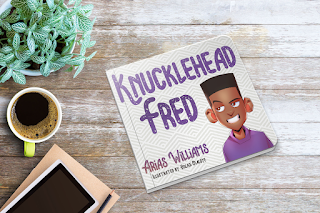 His parents just can’t figure out how to make him sit still and listen!

But when Fred finds himself in need of a favor, Mom and Dad use it as a perfect opportunity to teach him a thing or two about responsibility.

I read Knucklehead Fred with my 9 and 7 year old boys. It was a good book to read, since my 9 year old is at the stage where he does not think he has to listen. Knucklehead Fred is about a boy, who does not think he has to listen to his parents or obey their rules. When asked to walk by the pool edge, he chooses to run instead. He does not think that rules apply to him. However, there comes a point that he needs something from his parents. He wants money for the ice cream truck. His parents tell him No. He starts to throw a fit. He tells his parents that he has been very good. It was at this point of the book, my 7 year old looked at me and said. "Mom. He has not been good. He did not eat his veggies, he ignored the adults directions. I would not give him that dollar either.". Fred's parents tell Fred that he could have had the dollar if he would have followed directions, listened to what his parents, and cleaned up himself. Finally, the message clicks with Fred. So, he works real hard to please his parents. He finds out what happens when you do what you are told.
We all enjoyed this book. The story flowed nicely and rhymes. We read this a few times already - and the boys laugh at what a knucklehead Fred was being.
I received a copy of this book through the Silver Dagger blogging program, all thoughts are my own . 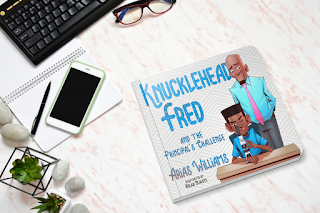 Knucklehead Fred and the Principal's Challenge

After struggling with behavior problems at school, Fred is presented with a challenge by his school principal, Mr. Boronstine. He promises Fred that if he can be a model student for one week, he will be presented with a special surprise.

Will Knucklehead Fred rise to the occasion and be the best he can be? Or will he fail to control himself and miss out on a special treat?

Find out in this second installment of this whimsical children’s book about a mischievous little boy who walks to the beat of his own drum.

The Principal’s Challenge is the second in the Knucklehead Fred series, a collection of stories about the troublemaker you can’t help but love.

In Book 2, Knucklehead Fred and the Principal's Challenge - we return to see that Fred has slid into some bad behavior in school. He does not want to sit inside and do worksheets. He wants to be outside. Our favorite part of this book can be found on page 8. "He could not stand the indoors, the classroom was just no fun. He'd much rather be outside where he was free to fart, scream and run." The boys laughed so hard at this page. (Boy humor). They laughed and howled over it. Once the collected themselves, my 9 year old looked at me and said "He is not wrong though" That started the laughing again.
Since Fred does not like to be inside, he refuses to come inside when recess is over. This leads to him being sent to the principal office. The principal makes him a deal. If he can behave the rest of the week, he will get a surprise. Surprisingly, Fred is able to get his act together. He even surprises himself. The surprise will remain a surprise, so that you can read the book for your self.
I received a copy of this book through the Silver Dagger Blogging program, all thoughts are my own. 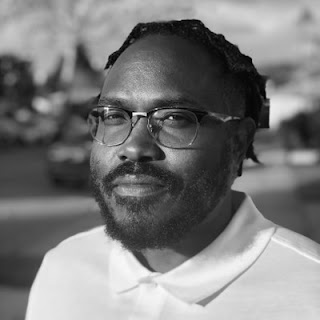 Arias Williams is a creative based in Los Angeles, CA.

He is a father of two children, a husband, and currently teaches 7th Grade in South Los Angeles.

When he isn't working on Knucklehead Fred, Arias can be found in his home studio making beats, hanging with his family, or working to educate the future of Los Angeles.