Trisha Mills, a student in her final semester of law school, has fond memories of listening to the music of Adaline, a once-famous recording artist. Trisha learns that Adda is now a street singer in Asheville, North Carolina where she lives in a storage closet she rents for her equipment. Adda’s sole means of support in her senior years comes from the donation box.

Along with her meager possessions, Adda has a box labeled, “Things to Remember.” Once Adda and Trisha become friends, Adda agrees to show Trisha the contents of the box, and reveals her journey from her beginnings as a sharecropper’s daughter, her rise to fame, and her fall into poverty.

Even while busy cleaning out the home of her deceased grandfather, preparing to sit for the bar exam, and planning her wedding, Trisha cannot overlook the injustices that Adda has experienced. Aided by attorney Rusty Bergstrom, Trisha convinces Adda to seek restitution. 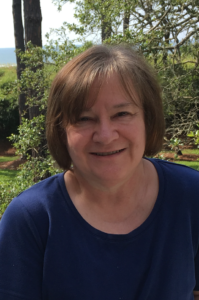 Kathleen Neely is a retired educator and school administrator. She served as a principal at elementary schools in Pennsylvania and South Carolina. When she’s not writing, she’s traveling to see her sons, daughter-in-law, and grandchildren scattered throughout the eastern states.

I’d like to introduce myself and then acquaint you with some people who live inside the pages of my book, The Street Singer. I am a retired educator having taught preschool, fourth grade, and then moving into administration as an elementary principal. When I retired, I pursued my desire to write. My first novel, The Least of These, won first place in a contest titled Fresh Voices. That honor renewed my confidence, and I went on to write my second book, The Street Singer. Although The Street Singer was not my first novel, it was the first to reach publication. That holds a special place in any author’s heart. I’d love to introduce you to a few of my favorite people.

Trisha Mills is a law student, engaged to marry Grant Ramsey. Trisha’s grandparents raised her from her early teens when her parents died. As an only child, she’s left with no family following her grandparents’ death. Trisha longs for a sense of heritage.

Adda Marsh is the daughter of Mississippi sharecroppers and has little education. What she does have is an amazing singing voice. Using the pseudonym Adaline, she experienced great success in the music industry in the era of Ella Fitzgerald. Her record company let her go when she aged and her voice faded. She never realized how the recording company duped her. Penniless, she sings on a street corner for donations.

Rusty Bergstrom is a lawyer who agrees to help Trisha in her quest to find justice for Adda. He brings both compassion and levity to a difficult situation. Rusty sprinkles lawyer jokes throughout the book, causing Trisha to laugh—an characteristic in short supply.

Grant Ramsey is a financial advisor working hard to build his clientele. His father is a state politician with aspirations for becoming governor. He learned to exercise caution in his words and actions so protect his father’s image. That guarded nature tells him that Trisha’s friendship with Adda is not a good idea.

There you have it. Trisha Mills’ story with the makings for a multi-generational, diverse friendship, the challenges of two very different men vying for her affection, and a legal battle to right a wrong. Oh, I forgot to mention, all this while renovating her grandparents’ old farm house. I hope you enjoy reading The Street Singer as much as I enjoyed writing it.

The Street Singer is written by Kathleen Neely. This is the second book that I have read by this author. The one thing that I am learning about this author is that she will send you on an emotional rollercoaster and will tug at your heart strings. This book follows the lives of two women. Two women who are brought together by the beauty of music. Two women who have had very different lives.

Trisha Mills is engaged to Grant who is a financial planner. His father is a politician. Trisha is a law student who was raised by her grandparents. Her parents died when she was young. Trisha grew up listening to Adaline with her grandfather. She was one her favorite artists. However she finds out that post fame has not been kind to Adaline. She has now been supporting herself as a street singer. She carries a box of her belongings around with her. Trisha finds this out and gets to know Adda, as she is known now.

Grant is not thrilled about this new found friendship, especially after Trisha learns Adda's story and wants to seek justice for her, through the help of Rusty. Rusty takes on Adda's case pro-bono. I love Trisha and her big heart and wanting to help right the wrongs that were done to Adda.

Well written, intriguing storyline, great characters. I enjoyed this book. I received a copy of this book through the Celebrate Lit blogging program, all thoughts are my own.