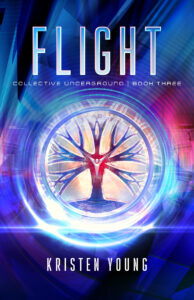 On the cusp of graduation, Cadence is finally feeling in control. She’s about to become one of the prestigious Elites working in the Hall of Love. Plus, she can take her place as a full member of the underground Sirens who meet secretly in Love City. She’ll finally be able to use her memory skills for good, instead of reporting people as a Watcher.

But a dangerous trap is set, throwing Cadence into unwelcome and unfamiliar territory. Someone in the Collective remembers things that could very well get her killed. The Muse is by her side, after all, but will she be protected when someone powerful wants her dead?

Cadence just wants to be normal, free from politics or squad intimidation. Will she be able to achieve her Elite dreams, or will sinister forces leave her running for her life?

A Scottish-born Australian author, Kristen Young has worked in children’s and youth ministry for decades. She writes fiction and non-fiction for teens, and always has a notebook on hand to capture stray story ideas. In her spare time she loves hanging out with her family, watching movies with subtitles, and enjoying a little too much chocolate.

Okay, so Flight is the final novel in the Collective Underground series. Was it hard writing the conclusion?

The funny thing is, Flight was originally book 1! I wrote the story ages ago, and the manuscript won a Caleb award for unpublished fiction. The prize for that was a manuscript assessment, which came back with the comments, “This is good, but it starts a little fast. Can you add some backstory?”

So the backstory turned into two books?

Yes! Of course, by the time I came back to Flight, there were so many more story threads to follow, so the final result is very different to the original.

What did you change?

Some of the characters in Apprentice and Elite needed to re-appear, and so I had to change some of that. Like Hodge, who didn’t exist when I wrote the first version of Flight. There was also quite a lot of unfinished business that carried over from the first two books, and I felt that they needed some resolution, too. I can’t tell you too many details, though, because that would spoil the fun.

What can we look forward to in the final installment?

More thrills, more plot twists, and maybe some love. Just a whole lot of excitement, really. But seriously, Cadence is thrown into some pretty difficult situations this time, and she has to re-evaluate her whole mission. There are also some pretty high-level plots going on in the government that might send her a bit of trouble, too…

Love? Does that mean what we think it does?

I’ve already said I can’t spoil the fun of reading.

Sorry. You’ll just have to read it. 🙂

Flight is written by Kristen Young. This is the third book in the Collective Underground series. I have read the whole series and would recommend doing the same. This is a YA dystopian sci-fi book - which is not my normal genre to read, however I have really enjoyed this series.

Cadence is finally feeling like she has control. She has been working towards becoming a prestigious Elites. She is finally able to use her memory skills that she has done some time perfecting for good. It’s been so nice seeing this character grow throughout the series. Seeing her in the first book where she had to report everything to the Watchers. Cadence has someone trying to harm her. The author did a good job throwing a curveball. I enjoyed following the mystery intertwined in the story.

I have really enjoyed this series. I feel this was a grand finale to the series. The characters have evolved and grown throughout the series. The storyline is intriguing. Thank you to the author, publisher and Celebrate Lit for allowing me to read a copy of this book - all thoughts are my own.

To celebrate her tour, Kristen is giving away  the grand prize of a $50 Amazon gift card!!