Book: Of Fire and Ash 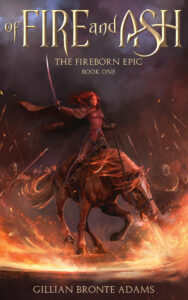 She rides a fireborn, a steed of fire and ash, trained for destruction. Ceridwen tal Desmond dreams of ruling like her father over the nation of Soldonia, where warriors ride to battle on magical steeds—soaring on storm winds, vanishing in shadow, quaking the earth, and summoning the sea. After a tragic accident claims her twin brother, she is exiled and sworn to atonement by spending her life—or death—for her people. But when invaders spill onto Soldonia’s shores and traitors seize upon the chaos to murder her father, Ceridwen claims the crown to keep the nation from splintering. Combatting overwhelming odds and looming civil war, she begins to wonder if the greatest threat to the kingdom may, in fact, be her. With fire before her and ash in her wake, how can she hope to unite instead of destroy? 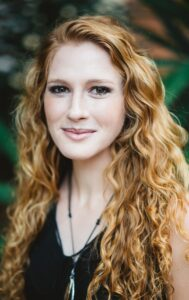 Gillian Bronte Adams is a sword-wielding, horse-riding, wander- loving fantasy author, rarely found without a coffee in hand and rumored to pack books before clothes when she hits the road. Working in youth ministry left her with a passion for journeying alongside children and teens. (It also enhanced her love of coffee.) Now, she writes novels that follow outcast characters down broken roads, through epic battles, and onward to adventure. And at the end of a long day of typing, she can be found saddling her wild thing and riding off into the sunset, seeking adventures of her own. She loves to connect with readers online at www.gillianbronteadams.com.

I still vividly remember the moment, years ago, that the idea for this book came to me. It was the end of July, sometime between ten and eleven at night, and the insects outside were buzzing so loudly you could hear them through the window of the back room of the camp office where I sat. Slumped exhaustedly in a chair, shivering in the air conditioning in my sweat-soaked jeans and a t-shirt, I was waiting for the other summer staff to arrive so we could start and finish our planning meeting and stumble off to our cabins to sleep.

Even then, writing felt like breathing to me, so to pass the time and keep myself awake, I drew a ragged notebook out of my backpack and started scribbling sparks and specks of story ideas, barely noticing how my arm left smears of dirt on the page. It was my third or fourth summer as Head Wrangler, which meant I spent my days either on horseback or jogging alongside kids who were learning to ride. Dirt was just a part of life.

So many details of that night remain fresh in my mind, it’s odd that I can’t remember exactly what sparked the idea itself—the wide-eyed grin of a boy on his very first ride, the budding confidence in a girl as she raced around the barrels, or the cumulation of all the hours I’d spent atop my own wild thing, clearing wooded trails with a machete, leaping across creeks because he refused to simply wade, and performing amateur stunts for the occasional skit.

Whatever lit the fuse, as soon as I scribbled the first set of words on that crumpled notebook page, I knew I had struck gold. I felt it in my bated breath and leaping heartbeat. “Super-powered horses.” Or better yet, “Magical steeds.” Some that could breathe fire, some with hides like stone that could quake the earth with their hooves, some that rode upon the waves of the sea, and still others that could step into shadow and disappear without a trace.

Seven in all, they quickly cluttered the page, and I couldn’t wait for the chance to write the epic tale that could contain creatures like these. Unfortunately, I didn’t have a story yet. Just a page full of fanciful beasts and a head full of wild dreams. No characters. No plot. No premise. Or so I thought.

The meeting started then and I had to tuck my notebook away, but I couldn’t banish the magical horses now roaming in my head. Over the weeks and months that followed, I took them out and let them dance across the page every now and then, gradually fleshing out details, uncovering their secrets, and imagining their world. Yet the story itself remained elusive, until I finally, reluctantly, set them aside and turned my attention to other things. Months before that summer night, I had, in a fit of wild inspiration, outlined a new three book series starring a female warrior who longed to rule like her father before her. It was a bit daring and a lot daunting, but while I liked the characters and the concept, the world itself was lacking that flare of uniqueness, that touch of magic, that allows a fantasy realm to sprawl beyond the confines of the page and take root in the imagination of a reader.

Reading the outline afresh, I lamented that it was the sort of lusterless story doomed to die on a novelist’s hard drive, and perhaps my incredible magical horses with it, for though they were lustrous enough, without a story, they could never truly live. Without a story …

What if my aspiring queen lived in their world? What if she rode a fire-breathing steed? How might those beautiful magical creatures enhance and ultimately, shape her and her story?

Combining any two concepts can be dangerous, as you never know how they will interact until you try it. The resulting explosion shattered my outline and blasted apart my carefully formed plans, but when the dust settled and the heart of the new story emerged, I knew that this finally was an epic tale worthy of my magical steeds, and a world deep and dangerous enough to have forged my aspiring queen. It was, at last, Of Fire and Ash, the first book of The Fireborn Epic.

Of Fire and Ash is a YA Epic Fantasy book that is written by  Gillian Bronte Adams. This is book one in the Fireborn Epic Series. This is also the first book that I have read by this author. I review the YA books with my son, who is 10.  One of the things that my son and I discovered this year with the many books that we have reviewed is that he really enjoys reading fantasy books. He said that it always feeds his imagination.

The author put a lot of work into creating the characters. She also put a lot of work into the plot. She has created a world and story and has put in three point of views to tell it. At first I thought it was going to be confusing. However, the author wove it all together seamlessly. Ceridwen has been banished to death by her own father, the King. However then her father is married and she steps into being the Queen to save her nation.

This is a perfect YA Fantasy book. My son reads at a high middle school level and had no problems following along. This is story of battles against evil. There are magical creatures and quests. The author did great job with descriptions - you actually feel like you are there.

For Him and My Family, December 15

Because I said so — and other adventures in Parenting, December 19

Where Faith and Books Meet, December 20

Through the fire blogs, December 23

To celebrate her tour, Gillian is giving away the grand prize of a $40 Amazon gift card!!