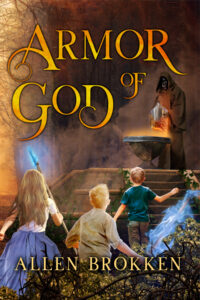 In a battle to possess the armor of God, Lauren, Aiden and Ethan stand against their father as he fights for the enemy.

The Dark One has a foothold in the Iron Mountains, and his steel warriors have corrupted the giants. With a formidable army behind him, he fights to secure power over the heathlands. Darkness pervades Zoura’s frontier.

Reunited with Mother and Uncle, twelve-year-old Lauren and her younger brothers, Aiden and Ethan, must light the Tower of Light in Blooming Glen to save Zoura. But the enemy stands in their way. They need the lost Armor of God to overcome the forces of darkness.

As the children search for the armor, the enemy raises a new champion—their father. Knowing the power of the armor and the children’s plans, their father dispatches the Steele Brothers to retrieve the armor for the Dark One.

Zoura’s last chance for salvation will be lost, if darkness corrupts the armor before the children can take it back. Lauren, Aiden, and Ethan have prevailed against the forces of darkness before, but do they have the faith to stand firm against their father as he fights for the enemy? 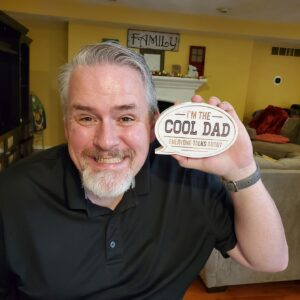 Allen Brokken is a teacher at heart, a husband and father most of all. He’s a joyful writer by the abundant grace of God. He began writing the Towers of Light series for his own children to help him illustrate the deep truths of the Bible in an engaging and age appropriate way.  He’s dedicated 15 years of his life to volunteer roles in children’s ministry and youth development.  Now that his own children are off to college he’s telling stories and sharing clean humor on social media @allenbrokkenauthor, and through his blog https://www.allenbrokkenauthor.com

Armor of God is the fourth book in the series, and it takes a significant departure from the others in that the children’s mother has joined them in their journey.  After rescuing her from the Iron Mountain in Fear No Evil, she is ready to take charge of the group to save Father.  However, things are a lot more complicated than they appear, and her children have grown used to making important decisions independently.

This book challenged my writing skills.  On the one hand, middle grade so often sends the parents away to give the kids agency to be the heroes of the story.  But what happens when the parents are active participants?  Most middle grade goes one of two directions. The parents are incompetent fools who the wise all knowing children must save, or the parents become wicked antagonists working against the children’s best interests.

As a parent, I cringe when those stereotypes come up in a read-aloud.  The parents I know are not bumbling fools and generally work hard to provide the best for their children.  So stories that emphasize something else tweaks something in my mind as I’m reading. After talking to a lot of parents, they feel the same way.

So I worked hard to give Mother a very specific objective, save Father. At the same time, the children have concerns that could take them off that path.  With the help of my editor and critique partners, I was able to cast Mother in a good light.  Armor of God provides readers a realistic portrayal of the family working through conflicts in a positive way, which makes the surprise ending all the more powerful.

So if you are looking for a middle-grade story to read to your kids where the parents aren’t bumbling fools or wicked abusers, you should check out Armor of God.

Armor of God is written by Allen Brokken. This is book four in the Towers of Light series. I believe this is the first book that I have read by this author. I have not read the other books in the series. I would recommend reading them in order, but we were able to peace together what was going on.  I feel earlier books you will get a real sense of who the characters are and how they got to where they are in book 4. I read this book with my 10 year old son, who loves to read fantasy books. This is a Middle Grade Fantasy book.

This book focuses on a mission to save father. The main characters are having to fight the darkness in order to save him. The author also put a brilliant Biblical Message of the Armor of God into the story - and the characters needed to learn this lesson to focus on their mission.

The characters are unique. The storyline is engaging. My 10 year old loves fantasy books -and he really enjoyed this one. We may go and get the other books in the series to grasp the full potential of the series.

For Him and My Family, December 8

Spoken from the Heart, December 10

For the Love of Literature, December 10

Because I said so — and other adventures in Parenting, December 13

Lights in a Dark World, December 17

To celebrate his tour, Allen is giving away the grand prize of a $50 Amazon gift card!!