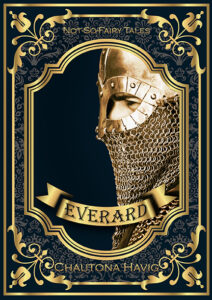 A Prince, a friend, and a lizard walk into a trap…

Everard of Havilund—fierce warrior, brave soldier, loyal friend, heir to the throne, and painfully shy.The war is over! Or is it? After four long years fighting in a war that has spanned a millennium, Everard is finally going home. He has faced everything he fears most—he thinks. Alas, trouble is brewing in the little hamlet of Hidden Hollow and he has only himself to blame.Follow Everard as he tries to slay the Dragon of Ironia, face the Giant of the Tripp Mountains, bring the Enchantress of Enervatia to justice… just for starters.Will he succeed? Will he overcome his personal demons that threaten all he is working for?Find out in this second installment of the Not-So-Fairy Tales.

“Can you write a short story for Kaira’s birthday? Something about a paisley princess? We’re doing a medieval theme, and Cathe is making the most scrumptious dress…”

A short story. Sure, I could. Why not? I’d throw in some things that fit Kaira and her family and some to make it not a bad attempt to write about a girl I only knew through her mother’s eyes. I’d make her hopelessly ordinary (which Kaira certainly was not). I’d give her lovely skills with a harp (which Kaira definitely has), and I’d give her the name Paisley Paisley so that, as her father, the king of Jackalopany, said “She’d be eager to marry and change it someday.”

Seventy-thousand or so words later the “short story” was done.

The silliest thing I’d ever written, but man… that was fun. Complete with a human chess game, frog pox, and heartbreaking bravery, it wasn’t great literature—Andersson would never approve—but it was mine.

It also gave me a thirst for something more… something… real. Okay, so that sounds a little weird writing about a fairy tale as “real” but in truth, it’s how I felt. I wanted to write a deliberate one, not just a wild romp through story ideas. Some elements of the first book would have to stay. For example, I’d given the first book a cheeky narrator who did a lot of “explaining” about “fairy tale terms” and definitions. She had to return.

But this time, I wanted quests daring dos, and well… yeah. I wanted something a bit more structured. I also wanted it to reflect another family I loved and cherished. In this one, a prince returns from a war lasting almost a thousand years (he didn’t fight the whole time, never fear) to report victory and does something so out of character that it sends his life in a totally different direction.

In my opinion, it has the most truly romantic scene I’ve ever written in it, but even most boys of very tender years (who still think girls are “yucky”) haven’t complained. THAT is my kind of romance!

But more than anything, Everard has honor, bravery, self-sacrifice, and every kind of love you see in the Bible. It’s the second book in the Not-So-Fairy Tales, but it won’t be the last. Leicelin has something she wants to share with the world, too.

Everard is book two in the not so fairy tale series that is written by one of my favorites, Chautona Havig. I have not read book one - and fear not - that is not a problem. They booth can be read as stand alones. The book starts out with humor and that continues throughout the book. Which is one of the reasons that I love this author so much. This book is written as if the narrator was talking directly to you, as a play by play. Which I thought was going to be weird, but ended up loving.

Everard has been fighting in a very very very war. He is now returning home. He wants to do the next thing and get married, but will have to accomplish a few things before that happens. Should be easy right? However the father of Roana, seems to be setting Everard up to fail. Everard who is a very brave soldier - does not seem to be brave when talking to Roana. I like the pace that the romance built, and all the humor that was sprinkled in to get there.

There are life lessons written into the book, and a dragon who was probably my favorite. The characters are well written and I enjoyed the story line.

Thank you to Celebrate Lit for allowing me to read this book, all thoughts are my own.

For Him and My Family, January 31

Because I said so — and other adventures in Parenting, February 5

Little Homeschool on the Prairie, February 9

To celebrate her tour, Chautona is giving away the grand prize package of a paperback copy of the book and a $25 Amazon gift card!!