Book Review and Giveaway - The Well of the Soul Author: Doug Powell On Tour with Celebrate Lit

Book: The Well of the Soul 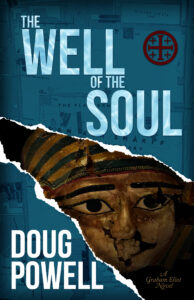 A list of hiding places on a strip of papyrus found inside a mummy mask thrusts Graham Eliot, Ancient Near East scholar, into a hunt for the treasures of the second temple. The list has already cost the life of a colleague, and now he is being pursued as he races to recover what has been lost for almost 2,000 years.

As he literally digs into Jerusalem, he is haunted by the recent deaths of his wife and daughter, which have left him doubting the existence of God. His spiritual and archaeological struggles become more entwined as his life is repeatedly threatened the longer the work continues. When he reaches the final site—the cisterns below the Temple Mount, a network of caves and tunnel no one has entered in 150 years and that no one has ever explored—Graham discovers far greater treasure than he ever imagined. 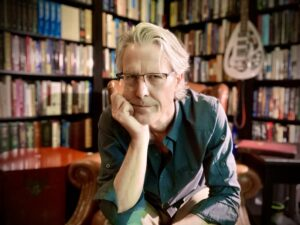 Doug Powell is the best-selling author of more than a dozen books on Christian apologetics, a speaker, musician, songwriter, graphic designer, and a very amateur magician. He has performed on Late Night with Conan O’Brien, and has been featured on CNN and NPR, and appears on two songs he co-wrote with Alan Parsons for the album The Secret. He lives outside Nashville, Tennessee.

In December 2013, I attended a private event where an Ancient Near East scholar demonstrated a method he had developed for deconstructing certain kinds of mummy masks. He explained that many mummy masks were made with an early form of papier-mâché called cartonnage. Instead of paper as we know it, the material that was molded and shaped was papyrus, an early form of paper made from the leaves of a papyrus plant. However, papyrus was too expensive to justify using it for mummy’s. So a funerary attendant would collect discarded books, letters, and documents—whatever he could find—and use them construct the mask.

The scholar then explained that if a mask could be found from the right location and the right time period, then it might contain fragments of biblical manuscripts. The problem was how to dissolve the adhesive to separate and extract the individual fragments. After much trial and error, he had hit on a solution—a liquid key, of sorts—to unlock the mask. He then went to the pantry where the event was taking place and turned on a camera mounted above the sink that fed video back to the auditorium where I watched the big screen along with more than a hundred other apologists and scholars.

He submerged the mask into what look like bubbles from dishwashing liquid, narrating what was happening as he worked the solution into the mask. After a few moments, he announced something had just come loose, then pulled a hand from the bubbles, an ancient fragment pinched between his fingers. He repositioned it in this palm and identified the text as Coptic. He set it aside to dry, then repeated the process, pulling fragments more quickly as the mask disintegrated.

The mask yielded several dozen fragments, many with writing on them. After letting them dry, the scholars who had watched the demonstration then tried to read and identify each of the texts on the fragments by entering the words they could make out into a database of ancient writings. Full disclosure: out of the entire batch, I could read only one word, which was and. So I didn’t exactly do any heavy-lifting to help move the body of scholarly knowledge forward. By the end of the next day, five fragments from the New Testament had been identified, and one from Jeremiah.

As fascinating as the experience was, I found myself wondering, What would be the craziest thing that could possibly be found inside the mask? At the time, I had no plans to write a novel. But somehow the question was a seed that grew in the dark, given that I didn’t actively pursue it. Years later—quite unexpectedly—I found an answer to the question. And I realized I was sitting on a premise to a novel. The presentation became the first scene in the book that became The Well of the Soul.

The Well of the Soul is written by Doug Powell. This is the first book that I have read by the author. This was an interesting book to read. I do not know a lot about ancient Egypt  - and I loved all the historical details that the author put in. The author will draw you in within the first few chapters. I desperately wanted to know what the big discovery was.

Graham Eliot, Ancient Near East scholar is called to do some digging. He travels overseas. However, someone does not want him to uncover the truth. Graham has been dealing with the death of his wife and child realizes he may have bitten off more then he can chew. Since the death of his wife and daughter he is having a hard time believing in God. Then of all of a sudden he is trying to do his job, and someone is shooting at him. He wants to stop digging and go home.

I was so into this mystery. What could someone be worried about? What is buried in places noone has touched in over 150 years? I liked the idea of him finding his way back to God. He knew he needed to depend on God to get everything in order.

The characters are well written. The storyline is like none other I have read before. I loved all the historical facts that the author placed into the story. I received a copy of this book through the author/publisher and Celebrate Lit blogging program. All thoughts are my own.

For the Love of Literature, February 6

For Him and My Family, February 7

Because I said so — and other adventures in Parenting, February 11

Little Homeschool on the Prairie, February 16

To celebrate his tour, Doug is giving away the grand prize package of a $50 Amazon gift card and a signed copy of the book!!