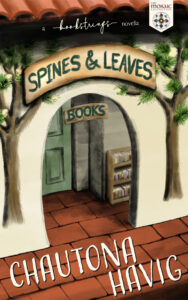 ♥ Books are the strings that tie hearts together. ♥

With a month to get from Orange County, California to Delaware for his next corporate challenge, Milton Coleridge decides to spend a week at Joshua Tree National Park.

He never expected to find a floundering bookstore in need of his particular business skills. Will his methods of saving companies from bankruptcy or takeover work on such a small scale? And can he convince two people to risk their hearts?

Step into the Spines & Leaves, Tamarisk, California’s oldest (and only ever) bookstore. Come in out of the harsh, desert sun and wind and peruse all the store has to offer. It might just be more than you think.

One man, one store, thousands of books.  What’ll it take to keep this bookstore from becoming a book ghost town… and what’ll it take for Milton to tie two heartstrings together?

Spine & Leaves is the introductory novella to the Bookstrings series.

The more I think about it, the more I realize that the Bookstrings series is a process rather than an idea. Each time I saw an indie bookstore close, each time I went in one with no one else in there for the hour or two I browsed, and each time I heard book lovers lament the lack of a store in their town… Yeah. Those experiences slowly grew into a wish—one where I knew how to rescue those stores from extinction. So maybe that’s a bit melodramatic, but that’s how it felt.

Somewhere in the midst of all that, Milton appeared—a business genius who, along with his faithful parrotlet, Atticus (not Finch), travels the country saving corporations from takeover or bankruptcy.

Milton went through several iterations. Older, balding, mustache, and always wearing a golfer’s cap. Then I had him as a young hipster dude who got sick of the rat race on Wall Street and took off on his own, using what he’d learned. That just felt too cliché.

Instead, I have a forty-ish guy who wears chinos and oxford shirts with topsiders, shorter than most men, and with a nonchalant air about him. And charm. The quiet guy with serious business skills just oozes quiet charm.

After deciding on Milton, I had to choose where to put the stores. I’ve been watching out for towns for years—using trips different places as research times. Would I create places that felt like real towns or use actual small towns? Though drawn to real towns, I had an idea for where to end the series, and, doing that meant a fictional town. Would it be weird to have four or five books set in small towns across America followed by a final fictional one?

The solution came to me as I learned that the Mosaic authors were doing a summer collection in 2021. If I started with a novella and ended the series with both in a fictional town, at least that fictional bit wouldn’t be out of the blue!

So, the Bookstrings series has two novellas and five full-length novels. (I couldn’t resist a Christmas “noella” in the charming town of Noel, Missouri—the “Christmas City.”) We’ll be off to other small towns around the country—one in Red Wing, Minnesota, another in Berne, Indiana, and one somewhere between Kingsport, Tennessee and Traveler’s Rest, South Carolina. If I can find a place in New England, that’d be great, too. Or maybe down in Mississippi… I’d love to visit my sister down there.

The Bookstrings series books all have one very important thing in common (aside from Milton and Atticus, of course). They all illustrate that books truly are the strings that tie hearts together.

Spines & Leaves is book number 0 in the Bookstrings series that is written by  Chautona Havig. This was a quick and easy read. Milton has a month to get from Orange County, California to Delaware. However, he stops in  Tamarisk, California when he sees a bookstore. Spines & Leaves is currently being run by the owners daughter, Ced (Full name is Mercedes). She came to town to help run the store when her father had fallen ill. She is struggling to see the book succeed and is worried that store will go under and her dad's dreams down the drain .

Milton, and his parrolet, Atticus (who was my most favorite character) go in and look around. Milton's career involves saving companies from bankruptcy. He offers to help, pro bono and starts making changes. Ced helps and is hopeful for the future. One person who is not thrilled with Milton, Attitcus and the changes is Marcus. Marcus is worried that Ced will fall for Milton. However, when the store starts to show potential and a profit, Marcus starts to relax.

This was a quick easy read that will leave you smiling. The author always writes such wonderful characters. I can't wait to read more in the series. The author's description of her scenes is so vivid I could see myself walking through Spines & Leaves and touching all the books.

Thank you to the author, publisher and Celebrate Lit for allowing me to read a copy of this boo - all thoughts are my own.

For Him and My Family, May 2

Inklings and notions, May 3

Blogging With Carol, May 4

She Lives To Read, May 5

Because I said so — and other adventures in Parenting, May 7

Locks, Hooks and Books, May 9 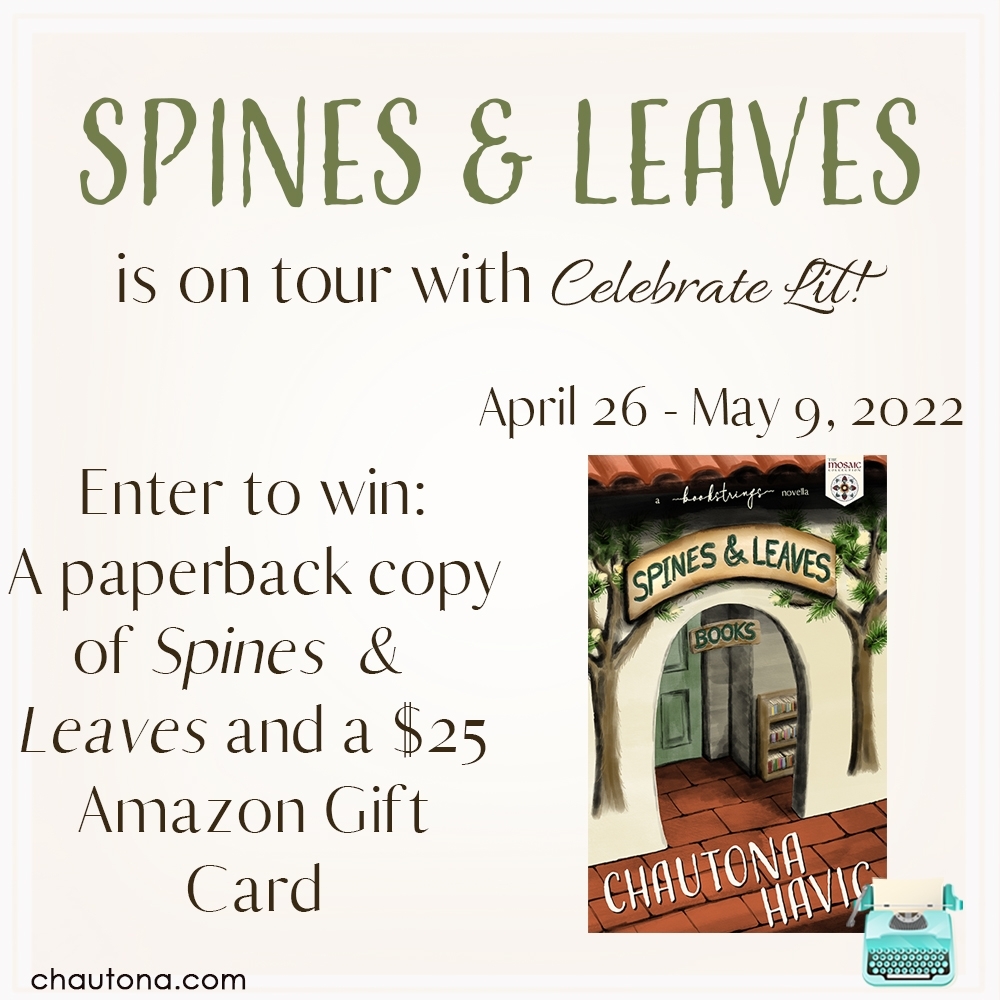