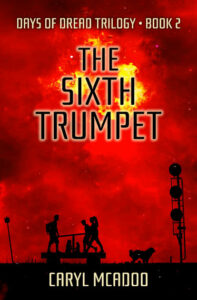 And the four angels were loosed, which were prepared for an hour, a day, a month, and a year, for to slay the third part of men. Revelation 9:15

The sixth trumpet has sounded. The world is at war.Compelled by a night terror, Jackson leaves the relative safety of Red River County on a quest to rescue his missing mother. He plans a quick dash to retrieve her from bondage in Rockwall, but he is thwarted by others who need rescuing at every turn. Big girls, little girls, a medium-size boy, the smartest kid he’s ever known, and one giant dog comprise his army. If there is a God in Heaven, is He really watching out for him? Fifteen-year-old Jackson still hasn’t decided. 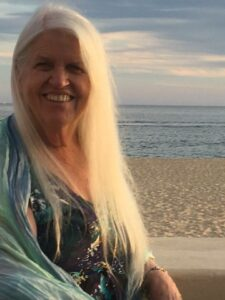 Some would call THE SIXTH TRUMPET a dystopian fantasy, and it is . . . but it’s also possible that tomorrow, an EMP (electromagnetic pulse) could be detonated over the Midwest and throw America back into the 1800s, before electricity and instant communication we enjoy today.

The “Days of Dread Trilogy” stories are packed with adventure as their young hero, Jackson Allison, his genius and devoted sidekick Albert Einstein Hawking, and his sort-of girlfriend Aria face dangers at every turn trying to save others.

An editor asked, “Why would you write a book about the end times for mid-grade and young adult readers?”My answer?

“To let them know through reading them that when tough times get here—and they will come—I want my readers to realize God will be right there with them and protect and provide. My hope is to build their faith.”

Jackson starts out an agnostic, but God loves agnostics, too. Jesus died on the cross for them like He did for you and me. He loves Jackson so much that He shows him His power and provision time and time again—

Of course, the boy’s mother and sister, and grandparents, and Uncle Roy are all praying for his salvation. We know what can happen when God’s people pray! How many times have you prayeds, “Father! Whatever it takes, draw my loved one to Your heart!”

Jackson, though, is a stubborn as a Texas Ranger on a mission!  His lieutenant succumbs to Holy Spirit’s calling in this story, but not Jackson, although he is being drawn to believe by all the things he cannot explain.

The Sixth Trumpet is a middle grade dystopian fiction book that is written by  Caryl McAdoo. Caryl is one of my most favorite authors that I have discovered since starting as a book blogger. She can write across a variety of genres, time periods and everything she writes I have loved. While I do not usually read middle grade dystopian fiction, I did read this with my 10 year old son, who reads at a 8th/9th grade level(He is in 5th grade). He seems to like this genre and wanted to share the book with his friends.

In the Sixth Trumpet, is part of the Days of Dread triology. This is book two. I have not read book one, but we did not have any problems following along. The main character, Jackson is about 15 years old. He is on a quest to find his missing mother. He is not alone in his journeys, there are others that help him. He is going off the visions he keeps getting and knows that his mother is not in a safe place. The visions have shown him multiple times where his mother is. He knows that he needs to get to her. He is worried that he is misinterpreting them. I feel that way sometimes when God tells me something. God knows this - so when he wants me to know something - he will 2 x 4 me with it. I will see it all over the place.

The author also ties in the aftermath of a future world war. She also puts in biblical truth (as she does with all of her books). This book is based off the book of Revelation. Which is a book that I have never made it all the way through. She does such a wonderful job with her descriptions and scenes you can close your eyes and feel that you are there. My son really enjoyed the scenes. He thought they were some of the best that he has ever read.

The author has written great characters, action filled story lines that kept both mine and my 10 year old sons attention. She can write along multi-genres and it was fun to see her write in a different setting.

For Him and My Family, October 1

The Meanderings of a Bookworm, October 5

To celebrate her tour, Caryl is giving away the grand prize of a $25 Amazon Gift Card!!