Stabbed in the Tart 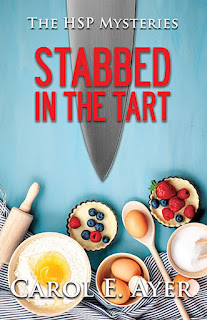 
Home bakery owner and Highly Sensitive Person (HSP) Kayla Jeffries has been hired for the Gourmet and Stay Valentine's Weekend at the historic Countryside Inn in Los Robles, CA. When one of her fellow cooks is murdered during dinner service, she becomes a person of interest-and a possible suspect.


With no niceties this time, the detective said, “We have information that you were romantically involved with Edward Winthrop. First you told us you didn’t know him. Then you said the two of you had been in a class together but hardly spoke to each other. Now we’ve found out you and he were in a relationship. I’d like an explanation.”


I stared back at him for a few seconds, emotions bubbling up inside of me. A relationship? Romantically involved? How could he say such a thing?


Keeping my voice as even as possible, I said, “Like I told you, I did realize after the murder that we’d gone to college at the same time. He was going by Ted then. We had one class together, only one, in which we barely interacted with each other. We didn’t have a relationship of any kind, not even a friendship. That’s the absolute truth. I don’t know where you’re getting your information, but it’s not correct.”


We did our mutual staring thing. Then the detective made a couple of notes on his pad and said, “All right. You can go for now. We’ll be in touch.”


I let out a long breath and went to collect Dad. I silently handed him the sand dollar and he put it back in his pocket.


I told him about the interview as soon as we were out of earshot of anyone in the station.


Dad’s jaw fell when I relayed what Det. Hernandez had said.


“How is that possible?” he asked.

Carol Ayer, a Highly Sensitive Person (HSP), lives halfway between San Francisco and Sacramento with her cat, Rainn. When she’s not writing, she’s reading mysteries and thrillers or watching movies and cooking shows. As a native Californian, she visits the ocean as often as possible.

Stabbed in the Tart is the first book that I have read by Carol Ayer. I was drawn to review this book because I love to cook and bake. I also love cozy mysteries. This book is a fairly quick read, and is a 176 pages. I was drawn in within the first few pages. This is book two in the HSP Mystery series. It can be read as a stand alone. The author does recap relevant information from the previous book as needed throughout the book, so you do not feel like you are completely lost.

Kayla who has home baking business, is asked to sub for a fellow baker at a historic Countryside Inn during Valentine's Day weekend. She is hesitant since it is a whole new experience. Kayla is a HSP (highly sensitive person) I did not know what this was prior to this book, but the author explains it and builds it into the character well. When she arrives at the event, she runs into her estranged dad. Which at first Kayla is not thrilled about. However when one of the other guest chefs is found dead, Kayla is then considered a suspect. Kayla is stranded at the Countryside Inn answering questions. She gets to re-connect with her dad.

Kayla and her dad are trying to figure out who is trying to frame her. She did not know anyone at the event, she decided to investigate herself. She makes a few mistakes during this course of action. The author did a great job throwing in some twists and turns. The author has also written some great supporting characters, including Kayla's boyfriend Jason. They do not seem to be on the same page when it comes to their relationship, so that was laughable. My most favorite were Kayla's cats, Sugar and Flour. They will keep her on her toes.

I generally review Christian fiction books and Cozy mysteries, and while I did not find anything wrong with this book, I do want to mention to my readers, that one set of characters is a gay couple. I want to mention that just in case it is a possible trigger for anyone.

I hope to read more from this author. I love the way she wrote, the adventure she took me on, and I enjoyed learning about HSP and what they go through.

Thank you to the author and Goddess Fish Promotions for a copy of this book - all thoughts are my own.


Carol E. Ayer will be awarding a $10 Amazon/BN GC to a randomly drawn winner via rafflecopter during the tour.