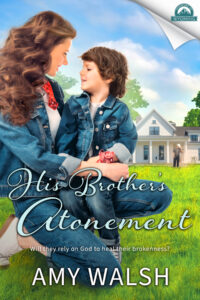 Shane Phillips had given up hope of ever meeting the nephew born to the woman his brother assaulted. After checks he sent to Aubrey Anders were returned, Shane decided the most he could ever do was pray for the Anders family. When Shane discovers that he and Aubrey work for the same graphic arts company, he must find a way to assure her he means no harm before both Wyoming branches meet for a conference.

Aubrey thinks she has worked through most of her trauma with the help of her psychologist and loving community. However, meeting Shane Phillips seems to have unleashed suppressed anxiety and insecurity. But as their paths continue to intersect, Aubrey begins to wonder if Shane could be part of God’s plan for her despite their painful connection. 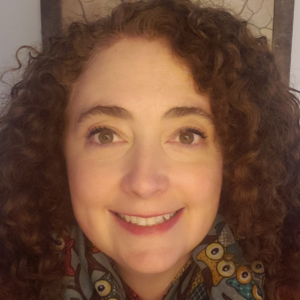 Amy Walsh is a 5th-grade teacher who loves teaching children about what she loves to do herself: reading and writing. She enjoys outdoor activities, especially hiking and camping. Amy also appreciates opportunities to share her faith through singing, teaching, and writing for her church family. Amy and her husband, Patrick, have three children: Bree, Spencer, Liz, and a son-in-law, Kyle. Amy and her family love to spend time together celebrating special occasions, listening to great music, swimming and kayaking, and having occasional ping pong tournaments.

Thank you for helping me spread the word about my first Whispers in Wyoming novel! I am thrilled to be part of this gospel and heritage-themed series! If you haven’t read any of the novels yet, you are in for a treat! There are thirty-three novels ahead of His Brother’s Atonement — and they are all STANDALONES, so they can be read in any order!

Aubrey is a young mother and graphic designer from Engelmann, Wyoming. Her terrible experience during college has caused her to keep to herself. Aubrey has no close friends and has never dated. But her parents are supportive, her son keeps her happy and busy, and she loves her job. Aubrey believes she is doing pretty well emotionally until the brother of the man who assaulted her turns up in town.

Shane suffered quite a bit when his brother was tried and imprisoned for assaulting Aubrey. People  actually turned their backs on his family, and Shane’s fiancé ended their engagement. Even worse was watching how it affected his parents. After Shane’s brother died in a freak prison accident, their mother spent several days in the ICU. For years, Shane has yearned to do something to help Aubrey and her son, wanting to atone for his brother’s terrible action. But Shane gave up hope of ever meeting his nephew years ago.

Jayson is Aubrey’s six-year-old son. He is obsessed with cowboys, horses, and the wild west. Art runs in Jayson’s genes from both sides of his family, so it is not surprising that he loves drawing and helping his grandpa with woodworking. Jayson never seemed to notice that he doesn’t have a dad, but when he finds out that his father died, he is so heartbroken that Aubrey promises to let him meet his uncle. So much for her thinking that she would never have to see Shane again!

The Creation of His Brother’s Atonement

I never really know when or how a story idea will enter my head.  I can drive by a house that catches my eye, and the next thing I know, I am imagining the characters that live there and writing their story in my imagination.  Sometimes watching the interactions of people prompts a story.  Other times my ideas come from research.

For His Brother’s Atonement, there were a bunch of factors that came into creating Aubrey and Shane’s story as far as the setting.  I had just been to a writing conference where one of the speakers said that many readers still love contemporary westerns. Adding to that, I had been following the multi-author group Whispers in Wyoming and other authors who wrote westerns, and I had been enjoying their posts.  Additionally, one of my teacher friends has spent portions of her summers out west and I love to hear her talk about landscapes and small communities.   A camping trip to Yellowstone and other western parks has been high on my bucket list for several years.

As for the situation that Aubrey is in, how she became a single mother and how she now deals with anxiety, her story just came to me while I was brainstorming.  Her and her son’s personalities developed in my mind as if they were real people.  I have wondered what it must be like to have a family member who is a criminal, the conflicting emotions it must bring: to still love that person; to be ashamed for what that person has done; to yearn to find a way to help the victim.  So I am sure those thoughts helped me create Shane’s struggles.

I wrote most of Aubrey and Shane’s story while I was spending nights with my grandmother in hospice.  Grammy was often sleeping while lovely hymn instrumentals were playing, and I felt as though I was in a sacred space.  I think some of my own inner struggles with trusting God’s sovereignty, with remembering that God does work out everything for our good, may have become part of the novel.  And in the last chapter when Aubrey prays during the Thanksgiving dinner, you can see some of my own angst about life changing and my own feelings of grief being resolved.

His Brother’s Atonement is a fundraiser!

As I was researching for this novel, I read too many firsthand accounts of women who had been assaulted and the devastating effects of the violence in their lives. According to rainn.org, every 68 seconds another American is assaulted, and one out of every six American women will be the victim of an attempted or completed rape in her lifetime. According to multiples sources, there are at least 30,000 rape-related pregnancies in the U.S. each year. Sexual violence is a significant problem in the U.S., and in other countries around the globe, it is even more rampant.

As I was delving into Aubrey’s thoughts and pondering how her assault had affected her and her family, I decided that I needed to do more to help women and children who have been victimized. As a first step, ten percent of the profits from the sales of His Brother’s Atonement will be donated to Heaven’s Family. To find out more about this organization, follow this link:  https://www.heavensfamily.org/ministries/victims-of-sexual-violence/

Aubrey and Shane don’t get to have a “meet-cute”, you know that sweet moment when a couple-to-be meet for the first time? In fact, when Aubrey sees Shane across Engelmann Park, she almost has a panic attack thinking that he is the man who assaulted her.

In the next book about Engelmann Wyoming, Portrait of Redemption, Cody will help Shane set up a “meet-cute” redo. I think it is so adorable that Shane wants to do that for Aubrey!

Two special characters mentioned in His Brother’s Atonement are from another of my novels, Elsie Whitmore. Elsie meets famous actor Graham Thurston for the first time when he tracks her down at her school, determined that she will audition for a movie he is producing. A somewhat spoiled star, he is annoyed that she hasn’t taken calls from his talent agency, so he is cold and judgy during their first meeting. In return, she thinks it is ridiculous for Graham to assume that she would consider giving up teaching just because he liked one of her YouTube videos. They also do not have a cute first meeting!

Here is my meet-cute!  I worked part time at a Sears in a mall while I was going to college. My husband, Pat, was a loss prevention agent there.   A coworker  who had a crush on Pat asked me to draw a Christmas card for her to give to him. In the PS, she told Pat that I was the one that illustrated the card. That led to Pat investigating who I was, and soon he was regularly stopping by my register at Sears to make small talk. He would have silly excuses to stop by, like having me help him put a baby outfit on a stuffed animal to purchase for his nephew.  It could have become very awkward if my co-worker hadn’t developed a crush on someone else in the meantime!

During the launch party for His Brother’s Atonement, some of the readers shared the stories of their first meeting with their husbands.  Some were adorable, and some were so awkward.  Have you shared your “meet-cutes” with your children and grandchildren?  Surprisingly it is something we forget to talk about, but it is part of their heritage!

His Brother’s Atonement is written by  Amy Walsh. This book is part of the Whispers in Wyoming series. I have not read many books in the series, and they are all stand alone books. This is a newer author to me and I love how she creates characters that are realistic. I also love that she wrote in a horrific event in Aubrey's life that ended up being her greatest joy. Jaysonis an adorable little boy who is the joy of Aubrey's life. Aubrey did receive help to deal with the aftermath of the assault, but she seems to freeze in time when she sees Shane who is her attacker's brother.

Seeing Shane shook Aubrey. Then she finds out that Lucas died in prison, and she feels relieved. Shane wants to get to know his nephew and help Aubrey, who has rejected his financial attempts. Now they find themselves working for the same graphic design company. I love how the author showed that hearts can soften toward reconciliation. That relationships can indeed heal. This was such a beautifully written story that I enjoyed very much. I am so happy to have discovered this author.

The characters are well written and realistic. The story line is unique and pulls you in within the first few pages. Thank you to the author, publisher and Celebrate Lit for allowing me to read a copy of this book - all thoughts are my own.

Because I said so — and other adventures in Parenting, September 30

For the Love of Literature, October 4 (Author Interview)

For Him and My Family, October 4