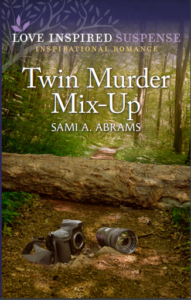 A case of mistaken identity…

After capturing a murder on her camera, photographer Amy Baker becomes the next target—but her identical twin is killed instead. Now on the run with her sister’s newborn, Amy has only one person to turn to—Detective Keith Young, her childhood crush. But when they discover Keith is the baby’s father, can he regain Amy’s trust to keep them safe…before the killer strikes again? Sami A. Abrams lives in Northern California, but she’ll always be a Kansas girl at heart. She loves to travel and watch sports. However, most evenings, you’ll find her engrossed in a romantic suspense novel. She thinks a crime plus a little romance is the recipe for a great story.

When I started to hear request for his story, I panicked. Authors don’t want to disappoint their readers. And being new to the published scene…Well, you get the picture. 😊

After the release of Buried Cold Case Secrets, many readers told me they wanted Keith’s story. In fact, the overwhelming response puzzled me. What had I done to create such a buzz about Jason’s partner? And of course, I had to ask why?

The general answer I received…Keith’s a nice guy and the perfect partner.

I have to admit, I got a little nervous since I had already written his story. And I worried if I’d done his character justice?

However, after writing Buried Cold Case Secrets, I knew Keith had to have his own story. He’s such a great guy and needed his happily ever after. So, I dove in and asked, what would happen if he made a huge mistake? Not just a physical one, but a heart one.

By the time I finished, I loved seeing Keith and Amy move past their poor choices and hurt to find acceptance and love. The perfect ending to Keith’s struggles.

All that to say, I hope you love Keith and Amy’s story as much as I do.  #TeamKeith

Twin Murder Mix up is book two in the Deputies of Anderson County series that is written by Sami A. Abrams. This is part of the Love Inspired Line. If you’ve not checked out this author, your missing out. She writes such heart pounding, action packed suspenseful stories that will keep you guessing until the very end.This is Deputy Keith Young’s story. We met him in book one. Fear not if you haven’t read it. There is enough back story. This can be read as a stand alone. Growing up Keith had two friends. Twins, Stacey and Amy. Amy is a photographer and she witnesses a murder and the murderer wants to make sure she doesn’t talk. However, Stacey who is in the military borrows Amy’s car and is murdered.Amy is now the care taker of Stacey’s child and on the run. There isn’t many people she can trust and it seems when she finally relaxed someone makes an attempt on her life. So she goes to her home town and to Keith. Who has blown her off for over a year.I absolutely love the Deputies of Anderson County. These characters that the author created feel like a close knit family. The entire team rises to the occasion to protect Amy. Factor in that it comes out that Keith is actually the babies father Amy feels like she made a mistake in coming home. Amy has always felt lesser then her twin.This story is filled with so many twists and turns that I kept picking different suspects out. The author does a great job of keeping you on your toes. There is the subject of a night of celebration accompanied with a one night stand but the author handles it with grace and tact and with the reminder of God’s love and forgiveness.The book is well written. I cannot wait until the next story comes out. Thank you to the author, publisher and Celebrate Lit for allowing me to read a copy of this story. All thoughts are my own.

Through the Fire Blogs, August 30

For Him and My Family, September 1

She Lives To Read, September 2

For the Love of Literature, September 4

Lights in a Dark World, September 4

Labor Not in Vain, September 9 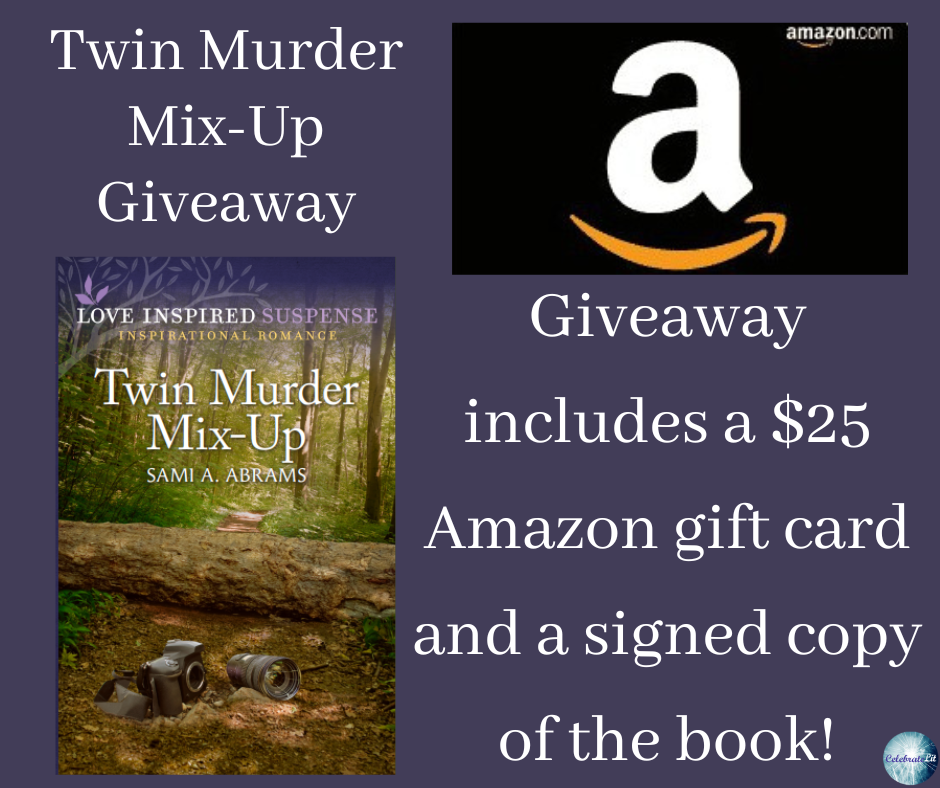 To celebrate her tour, Sami is giving away the grand prize package of a $25 Amazon card and signed copy of Twin Murder Mix-Up (US only) or eBook for outside the US!!