Book: Mabel Goes to the Dogs 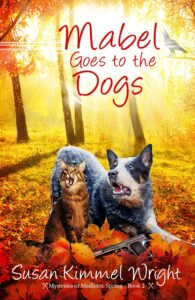 Mabel plans to bring the thrills of volunteering to the masses—if she doesn’t go to the dogs first.

When Mabel finds herself sharing a thicket with a dead body while volunteering with canine search-&-rescue, her life has clearly—once again—gone to the dogs!

After her losing her job at age forty-nine, Mabel thought she’d turned things around. Now she’s doing good by volunteering, and surely, she’ll soon be a successful author, writing about her experiences. After solving two notorious decades-old cold cases while serving as a historical society volunteer, she’s already getting invitations to appear on TV.

Her new assignment couldn’t be simpler. All she has to do is hide in the woods and let Millie the search dog practice finding her. But to her horror, Millie finds more than Mabel—there’s a dead body hiding in the same patch of brush. To make things worse, Mabel’s maybe-boyfriend, suspended PI John Bigelow, has a dark history with the victim.

While struggling with maid-of-honor duties for best friend Lisa, a string of disasters created by handyman Acey, and a disagreeable new neighbor, can Mabel solve another murder in time to save John’s detective license—if not his neck? 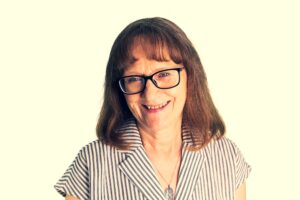 Susan Kimmel Wright is a child of the Appalachian Mountains. A former lawyer, Susan has published three children’s mystery novels and is a prolific contributor to Chicken Soup for the Soul books. Mabel Goes to the Dogs, Book Two in Mysteries of Medicine Spring, her first cozy mystery series for adult readers, is now available from Mountain Brook Ink. Susan shares an 1875 farmhouse in southwestern PA with her husband, several dogs and cats, and an allegedly excessive stockpile of coffee and tea mugs.

One of the great joys of writing this series has been the wonderful reaction my main character Mabel has gotten from so many readers. Typical comments are: “I love how quirky and imperfect Mabel is…Mabel is a fun character with a big heart who has the best of intentions.” (I also hear “hilarious” a lot… 😉)

Mabel is fifty, and her entire life has just unceremoniously changed. For the past twenty-three years, she’s had a job as a low-level attorney in a law firm. Boring, yes, but every day, she knew where she was going, what she was doing, and when and how much she was going to get paid. But suddenly, she gets the ax, and her old life is over. Blessed with a severance package from her former employer, as well as an inheritance from her grandma (also named Mabel) that includes a cluttered Victorian house in the town of Medicine Spring, Mabel resolves to reinvent herself. She will do good by volunteering while building a glamorous new career as a writer.

Many readers have told me they see themselves in Mabel. As one reviewer said, “She’s a bundle of insecurities ironclad in over self-confidence and I can relate to that!” And I guess I do too!  While Mabel is certainly a product of my imagination, she also reflects a bit of me. I left my job as a lawyer after about twenty years too (though I didn’t “get the ax!). I also live in a somewhat ramshackle Victorian farmhouse with a bunch of animals, and I see many of Mabel’s insecurities in myself. (Not to mention Mabel’s love of food—writing about Mabel’s diet gives me the opportunity to indulge in all the yummy things I try to limit in real life!)

Of course, nothing goes according to Mabel’s master plan. Mabel knows little about writing, her new old house is stuffed to the rafters with her grandma’s accumulations and comes with a hostile neighbor bent on continuing a decades’ old feud, and her first volunteer endeavor comes complete with a dead body. On the plus side, Mabel and her cat Koi acquire a new family member—Grandma Mabel’s big dog Barnacle, and Mabel seems also to have acquired a possible boyfriend, suspended PI John Bigelow.

By the time we run into Mabel in Mabel Goes to the Dogs, she has stumbled through two homicide investigations and also discovered the solution to an eighty-year-old cold case—the ax murder of a father and son in a neighboring historic house. This has gotten her an invitation to appear on a local morning TV show—and little else. Then Mabel undertakes a new volunteer assignment, helping train search-and-rescue dogs. The discovery of yet another body makes her wonder if she’s somehow bringing this on herself. Boyfriend John assures her, “You’re not causing dead bodies with the power of your mind, you goof.” Mabel isn’t so sure. Nobody else seems to be having this problem.

At least, life is now far from boring in the village of Medicine Spring…

Mabel Goes to the Dogs is a cozy mystery that is written by  Susan Kimmel Wright. This is the first book that I have read by this author, and it will not be my last. This is book two in the Mysteries of Medicine Spring Series.

First off, I love the cover. When the book arrived in the mail to review it made me smile. Mabel thought things were going to be different after losing her job. She starts to write about her experiences, and she even has television offers. She starts to volunteer, and then she finds herself next to a dead body while doing a canine search and rescue.

To make matters worse, her possible boyfriend, John has a history with the victim. He becomes a suspect, and Mabel starts investigating the case. I love her quirks. She made me laugh several times while reading this book. She is not health conscious like John. She does not make the best dietary choices.

This book moved at a comfortable pace. I enjoyed seeing the characters develop throughout the story. The secondary characters, Lisa and Acey were good too. I hope to read more from this author.

Thank you to the author, publisher and Celebrate Lit for allowing me to read a copy of this book --- all thoughts are my own.

Because I said so — and other adventures in Parenting, September 16

For Him and My Family, September 20 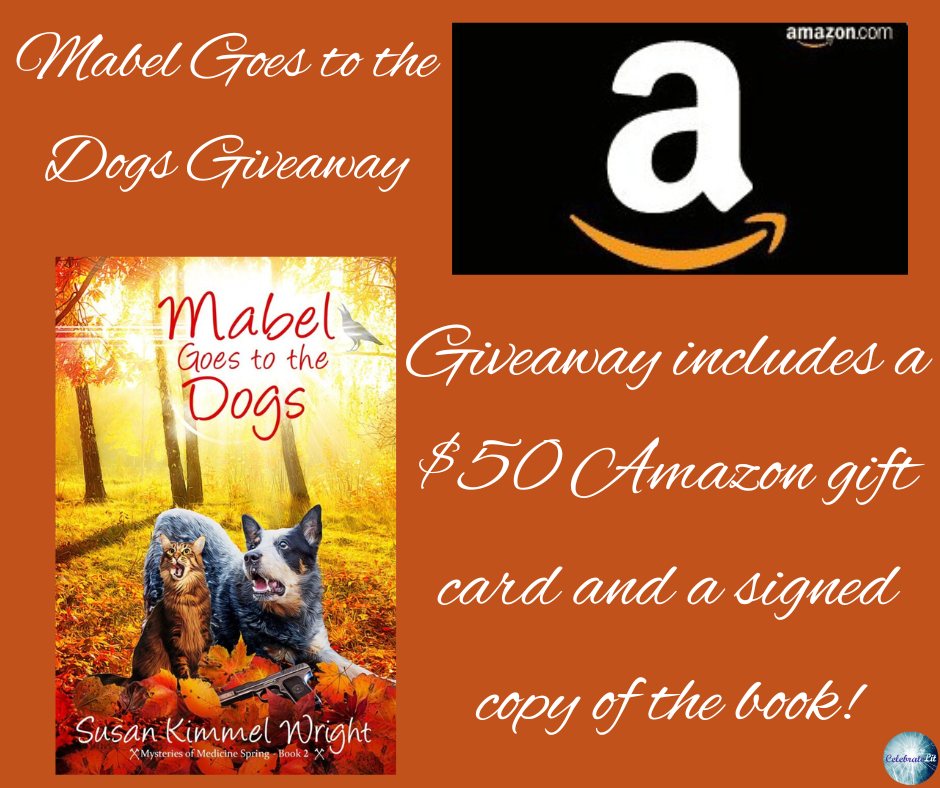 To celebrate her tour, Susan is giving away the grand prize package of $50 Amazon gift card and a signed copy of Mabel Goes to the Dogs!!