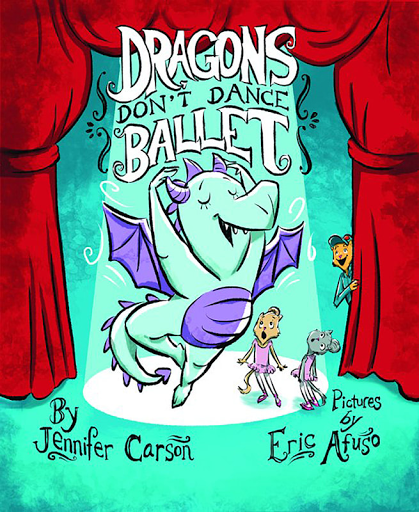 Esmeralda Dragon works the spotlight at the Metropolitan Ballet, but what she really wants to do is dance. Encouraged by her friend Harold to audition, Esmeralda takes a leap of faith only to discover that she doesn’t quite fit in with the other ballerinas. But Esmerelda isn’t ready to give up–and neither is Harold! Dragons Don’t Dance Ballet is a whimsical picture book that challenges body image expectations and encourages little ones to go for their dreams.
Buy the Book
Amazon.com
Dragon Charmer ~ B&N
add to Goodreads
Meet the Author:

Jennifer Carson lives in Michigan with her husband, four sons and many furry friends. She grew up on a steady diet of Muppet movies and Renaissance faires and would occasionally be caught reading under the blankets with a flashlight. Besides telling tales, Jennifer likes to create fantasy creatures and characters and publishes her own sewing patterns. Her artwork and patterns can be seen online at thedragoncharmer.com.

Where do you get inspiration for your stories?

Most of my story ideas come to me in moments of quiet “busy-ness”—like when I’m washing the dishes, or just waking up from a dream. Esmerelda, however, was inspired by a friend. Some of my boys and I both danced at a local dance studio when we lived in New Hampshire, and my mom came to one of the holiday shows just before Christmas. After the show she made a snide comment that my friend shouldn’t have been “up there” (on stage) because she did not have the right type of body—even though she was visibly the best adult dancer in the group.

How long have you been writing?

I actually started out wanting to illustrate, not write, but I caught the writing bug in high school and was encouraged by a writing professor in college. Then, a question by my then 7-year-old (in 2004) lit the bug in me again.

What was that question?

My son asked me how dragons learned to breathe fire. That was the impetus for my writing career and that question turned into my first published book, To Find A Wonder (2009), which was then turned into a stage musical in 2010.

As a mom and a writer, how do you balance your time?

My children are all adults now, so it’s not as hard, as when they were younger and busier. But, when they were little, I wrote during nap time mostly, and even when my two youngest were on different nap schedules, I’d nurse the baby while the two-year-old was sleeping and type with one hand. Thank goodness for those little nursing doughnuts!

If you could go back in time, where would you go?

My parents took me to the Renaissance festival when I was a freshman in high school. I can say, without hesitation, that I would go to medieval Scotland.

If you were stuck on a deserted island, which three books would you take with you?

I would take A Tale of Despereaux, a compilation of the Brother’s Grimm stories, and Beowolf.

What an adorable children's picture book. It is well written and beautifully illustrated. Esmerelda is so adorable. Esmeralda has been working the spot light at the ballet. However she has so many dreams to dance instead of running the spot light. After the performances she would perform while the janitor, Harold cleaned up. The janitor shows Esmeralda how there are open auditions and encouraged her to try out. Esmeralda is not like others. She is a dragon - and much taller then everyone else. Harold is her biggest cheerleader and encourages her. I loved this theme.

This book shows that even if you are not the typical type they are looking for you can still be amazing.

This is a great book geared toward younger girls. It is an adorable story. I received a copy of this book through IRead book tours - all thoughts are my own.